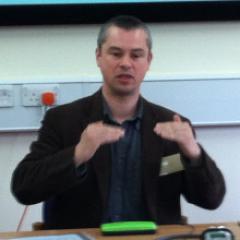 Neil McIvor is currently Deputy Director, Statistical Services Division and Deputy Head of Profession for Statistics at the Department for Work and Pensions. He holds an undergraduate and a postgraduate degree in Mathematics and Statistics from The Open University.

Describe what you do in your job

My main duties are being responsible and accountable for the production of the Department’s Official and National Statistics. We publish around 60 series of official and National statistics to the highest standards of integrity, free from political interference, as laid out in the codes of Practice for Official Statistics. Between May 2010 and January 2015 I have been responsible for the publication of around 800 separate publications. I am also responsible for advising Ministers and Senior Officials around the appropriate use of statistics, and ensure statisticians play a major role in influencing the development of current and future policy.

In my role as Deputy Head of Profession, I am responsible for the career development of the Department’s 200 or so professional statisticians, and have a major role in shaping the direction of the wider Government Statistical Service, through my role as chair of the GSS people committee.

It started out as a hobby whilst I was unemployed (indeed in my first year I forgot even to mention it on my CV) I successfully finished both a first degree and a masters in Maths and Stats with the OU, taking 11 years in total from start to finish.

What have you done since you finished studying? How have your OU qualifications helped your career?

Throughout studying for my first degree I held down a variety of different jobs, some of which were enhanced by my studies. Following obtaining a first class honours degree, I was able to meet the minimum requirements to join the Government Statistical Service’s Fast stream programme. Successfully passing the recruitment process in 2003, I have enjoyed a range of roles in the civil service, both as a professional statistician, but also as a professional policy developer, rising quickly through the grade to enter the Senior Civil Service in late 2012, and starting my current role in early 2013.

Without my OU degree I would not have had the minimum educational qualification to pursue that career path.

Just do it – you will be surprised how many doors and OU degree can open. And the discipline needed to study whilst working is widely recognised by employers. This could be life changing for you, as it was for me.