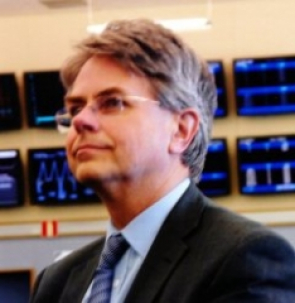 Robert Lambourne is Professor of Educational Physics at the Open University. He joined the OU after obtaining a PhD in the theory of fundamental particles from the University of London, and completing a temporary lectureship in the Department of Mathematics at the University of Durham, where he taught undergraduate modules on relativity and mathematical methods as well as contributing to an MSc course on differential geometry. He has now worked at the Open University for more than 30 years.

During his time at the Open University, he has progressed from Lecturer to Senior Lecturer to Professor, leading and/or participating in a number of educational development projects, while teaching on a wide range of modules in physics, astronomy and applied mathematics. He currently chairs the team responsible for the introductory science module, S104 Exploring Science.  He was Chair of the Department of Physics and Astronomy for three years, and then spent five years as National Director of the Physics Innovations Centre for Excellence in Teaching and Learning (piCETL). He has devoted much of his career to trying to improve physics education at all levels, particularly in international contexts.

A former Vice-President for Education at the UK Institute of Physics (IOP), and a past Chair of the Physics Education Division of the European Physical Society (EPS), he was a member of the International Commission on Physics Education from 2005 to 2014 and Chaired the Commission between 2011 and 2014. His work in educational physics has been recognized by the award of the IOP Bragg Medal and Prize in 2002, a UK National Teaching Fellowship in 2006, and the 2014 Gero Thomas Medal for his contributions to the EPS.

Always a strong supporter of efforts to increase public engagement with science, Bob Lambourne has long been involved in outreach activities across a range of media. His work in this area naturally extends beyond the Open University, and has ranged  from participation in the Programme Planning Committee of The Ediburgh Intrnational Science Festival to the Vice-Presidency of the Wycombe Astronomical Society. For many years he has been the Director of Studies of the Public Programme in Physical Sciences at the Oxford University Department for Continuing Education (OUDCE). That programme includes an annual Astronomy Weekend and an annual Brain Day (emphasising physical measurment techniques such as fMRI and EEG), as well as several one-off events that target topical issues and areas of enduring public interest across the physical sciences.

Current research interests are focussed on physics glossaries and the use of clear terminology in education, several different aspects of the use of history in the teaching of physics, and the Skyworld approach to familiarising novice astronomers and members of the general public with the layout of the night sky and the use of the celestial sphere. He is also co-supervising a PhD student based in Africa who is investigating the teaching of experimental physics in African secondary schools.

Amongst the books he has written, co-written  and/or edited are several university textbooks, many of them produced specifically for Open University module teams and containing substantial contributions from other team members. Those published since 2000 include:

A work of possible interest to physics educators, particularly those involved with multimedia is:

Also of interest to physics educators may be the chapter on physics teaching in distance education (co-authored with Nick Braithwaite) due for publication in August 2016 in:

Laboratory-based teaching and the physics innovations centre for excellence in teaching and learning (2007)
Lambourne, Robert
European Journal of Physics, 28(3) (S29-S36)