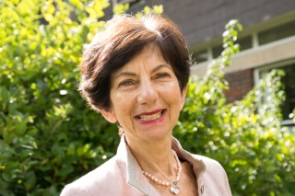 Until retirement in 2019, I was a Senior Lecturer in Psychology in the School of Life, Health and Chemical Sciences, Science Faculty. I am now an honorary academic in the School.

I  studied Psychology, Philosophy and Physiology at Oxford University, and completed a D.Phil. thesis on Visual Selective Attention in the Department of Experimental Psychology.

I originally joined the Open University as a member of the Psychology Discipline, Faculty of Social Sciences, and moved to the Science Faculty in 2005. I am a chartered member and associate fellow of the British Psychological Society.

In 2011 I became an OU student, studying for a B.A. (Hons) in Humanities and Romance Languages (Italian, Spanish and French), graduating with a 1st in 2017. My studies fulfilled a long held ambition to study languages, provided invaluable insights into OU student experience, and memorable interludes, such as a week's residential school in Santiago de Compostela. My studies have also helped me to consolidate the interdisciplinary aspect of my research interests.

In 2018 I received The Open University Research Excellence Award for Outstanding Impact of Research on OU Learning and Teaching, Curriculum and Students.

In June 2019 I was awarded the Herald Higher Education Lifetime Achievement Award.

A key theme in my research is neurodiverse styles of cognition in autism.  Two attributes of mind, self-awareness and imagination, have been a particular focus. My studies of poetry by autistic writers, funded by the British Academy, explored the capacity for self-awareness and imaginative self-expression in able autistic individuals.  Another project explored one of the least understood characteristics of autism - the unusual, highly focused interests pursued by some autistic people. In a joint project with Dr. Rosa Hoekstra, now at Kings College London, we explored special interests in people with autism, devising quantitative scales to measure the high levels of commitment and motivation evoked by these special interests, and exploring the roles they play in the lives of autistic people.

My work on cognition and autism embraces a broader interdisciplinary focus on imagination, creativity and aesthetics, reflected, for instance, in a British Academy symposium and edited collection on ‘Imaginative Minds’, and in ongoing collaboration with The Centre for Cognition, Kinesthetics and Performance at the University of Kent.

My autism research also has a cross-cultural dimension, including collaboration with the HEAT+ project team, funded by Autism Speaks, which explored autism awareness and stigma in Ethiopia, and developed mental health training materials for rural health workers. I have recently versioned these materials as OpenLearnCreate resources for community mental health work worldwide. http://www.open.edu/openlearncreate/course/view.php?id=2714

In the dementia field, I was co-investigator in the 3 year ESRC-funded 'MIDAS' project- ‘ A comprehensive profile of awareness in early stage dementia’- in collaboration with a research team including Linda Clare and Bob Woods (Bangor University), Robin Morris (Institute of Psychiatry) and Ivana Marková (University of Hull).

I am on the academic advisory board of Playing A/Part, an interdisciplinary AHRC funded project, exploring the identities and experiences of autistic girls and adolescents through creative and participatory research.

During my years at the Open University I have contributed written, film and multi-media material to a wide range of psychology courses, including Introductory, Cognitive, Social and Biological Psychology, and have authored several textbooks widely outside the OU, including Roth et.al. (2010) 'The Autism Spectrum in the 21st Century: Exploring Psychology, Biology and Practice'.

I chaired the production and presentation of the course DSE202 Introduction to Psychology and  contributed to successor courses, DSE212 Exploring Psychology and the psychology project module DXR222.  I chaired the production and presentation of SK124, Understanding the Autism Spectrum, a module studied by more than 8000 students 2009-2018, including a substantial number with personal and/or professional interests in autism. In 2018 I launched a new Badged Open Course ‘Understanding Autism’:

By December 2022 the course had attracted over 86,000 enrolments worldwide.  A French translation and adaptation of the course is now online at: