Dr David Platt is a research fellow at the University of Bristol. His computational work played a major part in Harald Helfgott's proof of the Weak Goldbach Conjecture last year, for which David won the first ever Gold medal in the mathematical sciences section of the 2014 "SET for Britain" event. After a BSc in mathematics with the OU, he completed a PhD at the University of Bristol.

I got back into mathematics aged 40 something after nearly 20 years in industry. When my children reached GCSE/A Level I did an A Level at a local Tertiary college, just in an effort to keep up. I got bitten by the bug and wanted to do more. The OU was the perfect avenue.

Describe your experience of studying for your OU qualifications

It was flexible enough to fit in round my other commitments and no more expensive than my other hobbies (that is all it was at this stage). I did not have to commit to more than one module at a time, but knew that the route to a degree was there if I stuck with it. The quality of the teaching materials was especially impressive and the tutorials and the summer school were delivered with enthusiasm and humour.

What have you done since you finished studying with the OU?

After 5 years of very enjoyable study, I graduated, but still wanted more. My OU degree was enough to get me a postgraduate position at Bristol under Andrew Booker and 3 and a bit years later I defended my thesis in Analytic Number Theory. Since then, I have worked at the University as a Research Fellow. I mix with mathematicians from undergraduate to FRS and at no time have I been made to feel my degree is in any way "second rate" not having been awarded by a traditional institution. 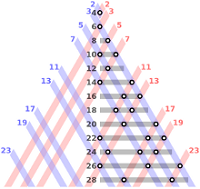 Goldbach's (strong) conjecture asserts that every even integer greater than two can be expressed as the sum of two prime numbers.

I was lucky enough to collaborate with Harald Helfgott from the ENS in Paris and help him to prove the Ternary Goldbach Conjecture which had been annoying us since 1742. My role was to design more efficient and rigorous algorithms to perform the massive computations Harald needed to support his work. The poster I submitted to SET Britain described these computations and was awarded first prize in the Mathematics section. Harald has been invited to talk at the International Congress of Mathematics at Seoul this year which shows how important his result is.

Put simply, without my OU degree, it would not have been possible for me to follow an academic career path. In addition, thinking back to my previous existence as an employer, I recognised that a maths degree demonstrated an ability to solve problems in a structured and repeatable way. Regardless of the actual course followed, being able to successfully complete an OU degree requires the capacity to manage ones time when faced with conflicting priorities. This is a key skill that any business will appreciate highly.

For what it is worth, I regard the OU as one of this country's crowning achievements. I am proud to be an alumnus and sing its praises at every opportunity.