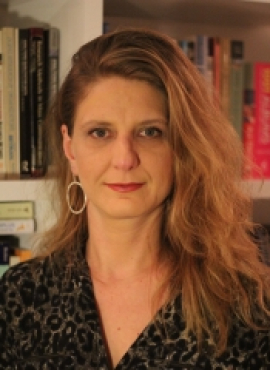 Giota Alevizou is a digital culture and social media scholar, with an interest on the intersections of politics, technology and collective expression.  She has served as Research Fellow, and currently a consultant visiting fellow, in the Strategic Research Area Citizenship and Governance, exploring ways of digital being in smart cities as well as digital and creative politics in the representation of the migration crisis.

Prior to joining the Open University, she has held research and faculty positions in Media, and Communications Department at the London School of Economics and Political Science as well as at the Department of Media and Film at Sussex University, where is also obtained her Doctorate.

Giota’s interest in the relationship of digital media and citizenship was developed during her research and teaching posts within Design Group and the Development Politics within the OU. During the last 6 years she has conducted funded research within two main strands: a) Urban media ecologies and creative civic activism; b) the intersections of digital technologies, knowledge and networked learning. Within these, she has explored issues as well as behaviours and technologies that contribute to spheres of urban activism and community media and has contributed to interdisciplinary vocabularies and methodologies for understanding digital and creative citizenship. As a Principal Investigator (PI),  she has recently finalised an AHRC- funded project exploring the intersections of communications, critical cartography and community asset mapping. The project was followed on from a large cross-university project, also funded by AHRC and EPSRC, Media, Community and the Creative Citizen.

Her work has also examined the changing nature of Higher Education (both in terms of political economy and discourses about networked pedagogies), and developed critical frameworks of understanding the intersections among open data, digital learning and social media cultures opportunities and challenges relating to participatory interfaces and pedagogies associated with social media (see projects, such Open Learning Networks (Olnet) funded by William and Flora Hewlett Foundation, JISC and HEA

Giota has published work in the cultural politics of technology in education, open, free culture, community media and urban civic cultures. Her forthcoming work include several co-authored chapters in the Creative Citizen Unbound (edited by Ian Hargreaves and John Hartley, Policy Press, 2016) and a monograph, The Web of Knowledge: Encyclopaedias in the Digital Age to be published by Polity (2017). She has previously taught and researched media and communications at London School of Economics and Political Science and at Sussex University. For further details see, tab [Publications] and academia.edu

Giota holds a SEDA certificate of teaching in Higher Education. She has delivered several interactive  lectures on aspects of distributed  intelligence  and online collaboration in large scale social information  environments to undergraduates within the modules of ‘Exploring  Creativity’  and ‘Digital Economies  and Audiences’  with the Digital Humanities  Department  at Kings College London as well as the Departments of Media and Communications at LSE and Goldsmiths (2014-2016).

Between 2005-2009, Giota taught at London School of Economics and Sussex University  both undergraduate and postgraduate courses  on; Theories and Concepts in Media and Communications; New Media, Information and Knowledge Systems; Modern Campaigning Politics; Media Analysis.

In addition to extensive supervision and teaching management activiites, she has published (together with Prof. Grainne Connole) the highly influential: Web 2.0 and Social media in Higher Education (HEA, 2010). Free download.

Between 2009-2012, Giota was involved in projects surrounding Open Education, Open Data and Learning Analytics, funded by, and developed through collaborations with the William and Flora Hewlett Foundation, the Wikimedia Foundation (US) as well as JISC and Higher Education Academy (UK).

Since 2011 she has been involved in a number of AHRC-EPSRC funded research projects under the Connected Communities / Digital Economy programs and developed partnerships with numerous stakeholders NESTA, OFCOM, The Glass House Community Led design, Living Maps Network and several councils and social enterprises in London. Within these projects, there has often an emphasis on developing community-academic partnerships and coproduce socially engaged interventions for community impact.

Civic media and technologies of belonging: Where digital citizenship and ‘the right to the city’ converge (2020-09-01)
Alevizou, Giota
International Journal of Media & Cultural Politics, 16(3) (pp. 269-290)

From digital commons to the data-fied urge: Theorising evolving trends in the intersections of digital culture and open education (2017)
Alevizou, Giota
First Monday, 22(6)

To wire or not to wire? Encyclopaedia Britannica versus Microsoft Encarta (2002)
Alevizou, Panagiota
Journal of Educational Technology and Society, 5(1) (pp. 163-167)

The dark side of the knowledge commons?: Open educational media and tensions surrounding autonomy and novel spheres of control (2012-10)
Alevizou, Giota
In : ECREA 2012 Pre-Conference: Imposing Freedoms: The Role of Copyright, Privacy and Censorship Governance in the Re/definition of Rights in Digital Media (23 Oct 2012, Istanbul, Turkey)

As we think? Collective intelligence, knowledge sharing and encyclopaedias in the digital media age (2007)
Alevizou, Panagiota
In : Annual Conference of the International Association of Media and Communications Researchers (IAMCR) (23-25 Jul 2007, Paris)

Austerity and the mediated networks of solidarity in Greece (2016-07-13)
Alevizou, Giota
Open Democracy

A literature review of the use of Web 2.0 tools in Higher Education (2010)
Conole, Grainne and Alevizou, Panagiota
HEA Academy, York, UK.