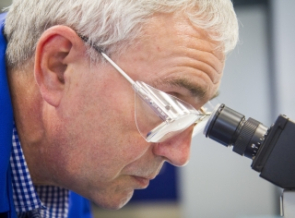 I have an interest in communicating science to young persons. With a colleague Dr Rob Janes we have developed a talk called the Magic of Oxygen which we have delivered to Science Festivals, Schools and local branches of the Royal Society of Chemistry.

I have also worked on a number of television programmes. Firstly I worked on the second series of Coast BBC/ OU production on the episode about Salt from Maulden in Essex. Then I worked on the Coast episode at Port Sunlight where we made soap and had a T-shirt washing competion with the presenter Mark Horton. In 2009 I worked on the first series of Bang goes the Theory on an episode, which involved the depolymerisation of polystyrene. In 2010 I have been working for Plum Productions on a series about E-numbers and food additives.

I am currently working on remote access experiments for analytical instruments including High Performance Liquid Chromatography (HPLC) Infra-Red and Ultra-violet / Visible spectrometers. I am also involved  developing and filming lab-cast experiments for our Science and Technologu modules.

In 2013 we gave our Science talk the Magic of Oxygen at the Royal Institution and the Sussex Science fair.

IN 2015 we gave our Science talk the Magic of Oxygen at Aston University for the Royal Society of Chemistry schools day to 650 school students.