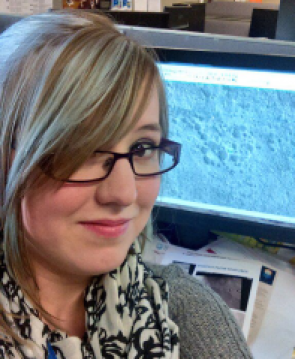 I am a final year PhD student studying the history of water within Lyot Crater on Mars.

Lyot Crater is an ~215 km impact crater in the northern plains of Mars, north of Deuteronilus Mensae. It contains, and is surrounded by, features formed by liquid water, glaciers and the repeated freezing and thawing of ice. The crater itself is thought to have formed during the early Amazonian (~ 3 billion years ago) with later water based channels forming in the mid/late Amazonian. This makes it the youngest large impact crater with some of the most recent evidence of water based activity.

Due to the size and depth of the crater and a potential unique microenvironment this crater may provide a location where both climate driven water and more ancient subsurface cryospheric ice may be present at the surface. Thus there is potential for preservation of material of astrobiological interest.

To understand more about the history of water in this crater, landforms and landscapes are being documented and mapped, and the impact is being modelled.

Passionate about science outreach with people of all ages. Particularly interested in encouraging the next generation to go into science (and particularly planetary science!).

I have experience in teaching through outreach, mathematics tutoring and a teaching award conducted at the University of Leicester.

I have attended conferences and workshops and presented my work at various locations including:

I have also conducted numerous outreach events at primary schools, secondary schools and in the community related to various topics including: